Edit
watch 01:36
We're Getting Mutants in the MCU - The Loop
Do you like this video?
Play Sound

SeventyEight
Zero Gravity is a song performed by Kerli. She debuted the song during a performance in Chicago in August 2011 and a demo of the studio version premiered on the Seattle radio station C89.5 on September 2.[1]. This song is the promotional single for Kerli's second studio EP.[2]

Kerli recalled thinking to herself upon hearing of space tourism, specifically the project of Richard Branson (who Kerli admires) "This is incredible! Who would have known I can witness this during my lifetime? I should write a song about this and it should be called Zero Gravity".[3] Kerli began to write the song shortly before abandoning it. A year later, Kerli was scheduled for two studio sessions while in Stockholm. With only five hours remaining in the second session, Kerli "had kinda given up on the idea that any producer would actually get [her] and become [her] musical soulmate" before meeting her "favorite producers and friends for life", Svante Halldin and Jakob Hazell (the team known as "SeventyEight", who also collaborated on The Lucky Ones by Kerli). Kerli played for them the Wolfgang Gartner song "Space Junk" (2010), stating she "wanted to channel that but also mix some ethereal elements into that. Something like Enya or classical music. Something that sounds like angels on acid." The song was finished in the final hours of the session. Kerli stated the lyrics of the song were written in "the honor of" the Air spirits, sylphs, and that song is about "merging with the spirit, becoming all love", continuing to say she "[loves] the air element and it kinda seems to be something that keeps popping up throughout the music [she makes]."

Hopefully you will feel love when you listen to it cause that's honestly the only kinda emotion I'm into bringing into the world at this point. Hopefully you're coming on this journey with me cause our potential as spiritual beings is limitless and we are meant to be beautiful, full of joy and celebrating every moment of being alive. We're given breath when we're born and it's taken away from us when we die so I don't wanna waste any time not feeling, giving and receiving all the goodness there is.

The song begins with a simple 10-note piano chord before being picked up by a synthy drum beat. The pre-chorus features a dizzying up and down feel before the chorus merges the drum beat with the piano chord and some more prominent synths. The second chorus finds a dubstep-like wobble bass before the bridge brings a heavier take on the pre-chorus's dizzy feel, also containing a drop, drawing further inspiration from dubstep. The song ends with the piano chord.

In February 2012, Vespertine worked with Kerli for the creation of promotional material for the single. Regarding one photo, Brian said:

the visible triangle is the pagan fire symbol (upward isosceles triangle with no strike-through). You’ll notice that this is counterbalanced with the pagan water symbol on Kerli’s forehead (downward isosceles triangle with no strike-through). The other of the four “basic elements”, air and earth, are depicted at the top and bottom of the image respectively. I’ve included an image to help clear this up for you.[4]

The music video premiered on March 22, 2012. It is directed by Canadian director Alon Isocianu. The video begins with Kerli hanging upside down from inside a chrysalis in a forest. Two sylphs wander by and remove her from it. The scene cuts to Kerli singing above clouds in the sky before cutting back to her, now indoors, with the two sylphs who are grooming her. A new scene cuts featuring Kerli as a character which she named "the Sky Princess" performing in front of another character portrayed by herself, "Cosmic Geisha." After the performance, Kerli walks off the stage to meet with her. They each hold out their arms before the glowing sphere in between them explodes. Many creative elements of the music video came from an early treatment written by transmedia artist Jan Lucanus and filmmaker Aurore Barry and developed with Kerli herself. Original designs of the Cosmic Geisha were created by comic book artist Mihailo Vukelic in collaboration with Creative Impulse Entertainment as part of plans for a larger Kerli-themed project. 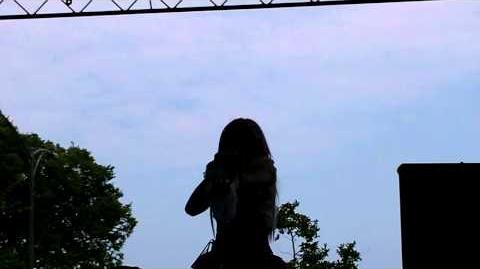 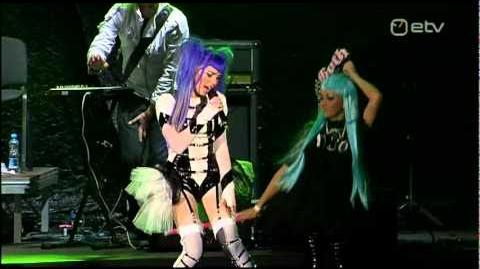 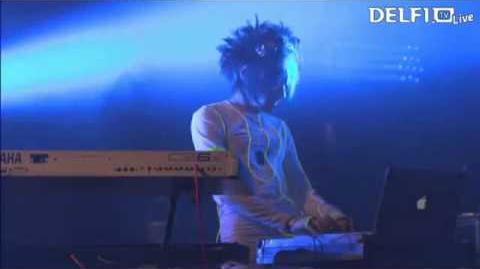