Kerli had created "Book of Kerli": a book of pictures that she had collected over the years of how she wanted the video and herself in the video to appear.[1] The music video is directed by Alex Topaller and Dan Shapiro (the team known as Aggressive). It premiered on May 19, 2008 on MTV's website.[2]

The video beings with a man dropping off a gift box on a doorstep. After he leaves, Kerli opens the box and finds a ball-jointed doll (painted by artist Lisa Jameson aka Pepstar). After re-entering the house, Kerli turns on the TV which shows a close-up image of an eye staring around the room. She then lights a match and throws it in the fireplace when it then begins to grow lotuses. Next, she activates the ceiling fan which precedes to spin the room around as she begins to dance.

In the next scene, Kerli is in a kitchen where the walls are an open wintry forest and Kerli appears in a more sexualized black outfit. The windows are brick walls and snow is spewing out of an umbrella. She opens the oven which is an extremely cold freezer where a chicken is "roasting". She then takes the chicken and places it in the fridge which is full of flames.

Next, Kerli is now in her bedroom lying on a bed of stones when she starts to cry (although the tears come from the Moonstones under her eyes) and her tears float up and transform into butterflies. Another scene is shown where Kerli is with a bird in a cage and the bird is sitting upside down on a perch. Returning to the bedroom scene, the man has returned and appears to be on the opposite side of her mirror as he pounds on it and instructs her to join him. Next, the ball-jointed doll from before is now a full-sized woman and is controlling the strings of Kerli who is now a marionette. After the Kerli marionette sings the bridge, she is placed in a box where the puppeteer ball-jointed doll cuts the strings and the bricks in the windows are briefly shown collapsing.

In the final scene, Kerli wakes up to discover a cut string attached to her arm. She proceeds to stare at the camera which pans out to reveal Kerli is now in the gift box from before and the full-sized, ball-jointed doll is holding it rocking on a rocking chair.

Kerli describes the video as being a "dark" Alice in Wonderland. The eye in the TV represents the all-seeing eye" of God. It is also part of the "inverted house" theme, where the TV is watching her rather than her watching the TV. The lotus is the only flower that is able to grow in the mud and "the thicker the mud, the more beautiful the flower is going to be". The lotuses symbolize overcoming obstacles as do the act of Kerli's tears floating off and transforming into butterflies. The wallpaper is an Estonian forest. Kerli used this because her last name, "Kõiv" means "birch" in Estonian [3][4] and because it also represents oppression[5].

Kerli based her "clock dress" on an image she saw on the internet and represents her love for numbers and their messy layout "pisses on the concept of time". Kerli describes her shoes as "fetish shoes".

Directors and creator of the video Alex Topaller said in an interview him and Dan Shapiro were playing around with an idea of "an inverted house, where everything is functionally and, at times, visually the polar opposite of what its expected to be". Kerli's singing face was put on the doll with CGI. The video took 3 weeks to complete[6].

The video features things that are the opposite of what they are expected or seem to be. 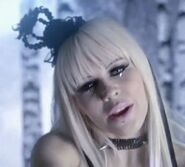 Beaded Dog Collar
Add a photo to this gallery

Cite error: <ref> tags exist, but no <references/> tag was found
Retrieved from "https://kerli.fandom.com/wiki/Walking_on_Air_(song)/Music_video?oldid=15586"
Community content is available under CC-BY-SA unless otherwise noted.