Kerli revealed the official album artwork for Shadow Works from November 27, 2018, to December 4, through social media. The artwork was shot by Estonian photographer Jörgen Paabu. The cover depicts Kerli standing, in a black dress, in front of a full black background. She is holding two Ankhs, an ancient Egyptian hieroglyphic symbol that was most commonly used to represent the word for "life" and, by extension, as a symbol of life itself. The waxing crescent moon on top of Kerli’s head symbolises a new beginning, a moment where people can send their desires to the world, a positive message of hope. For the logo, some Greek letters are being used: "Ξ" instead of "E" and "Δ" instead of "A". Furthermore, the symbol for bilabial click "ʘ" substitutes the letter "O".
Through an Instagram post, Kerli revealed that it took her about 6 months to conceptualize, sketch and handmake everything shown in the cover arts.[9] All of the different materials, once gathered from USA, Estonia and Asia, were all transported to Kerli's Moon Temple, which served as a "headquarter" for the Shadow Works visuals. Kerli started the process of creating and manufacturing things, spacing from dresses made of foam roll to "super high boots with random silk fabrics tied around them".

On June 30, 2021 Kerli announced the release of vinyls for Shadow Works and preoders started that day. Shipments are expected to start in September.[12] 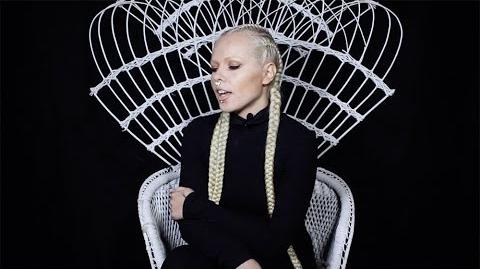