In June 2006, Estonian singer-songwriter Kerli signed a record deal with Island Records after auditioning to L.A. Reid and began the development of her then upcoming debut album Love Is Dead, whose producers include David Maurice and Lester Mendez. She released her self-titled debut extended play (EP) as a digital download through Stolen Transmission on October 16, 2007 as a teaser for Love Is Dead; a promotional CD containing the songs was also released through Island. Musically, the album contains songs from genres such as electropop and nu metal and lyrically, they are about individuality and rebellion. Walking on Air is a semi-autobiographical track which portrays "a little girl wishing to use her talents to find a better life" and has synth rhythms in its production. Love is Dead talks about a lost love, with lyrics like "All I want, all I want is right here / But love don't live here anymore". Kerli has described the song as "hard and dark enough, yet beautiful and light." She's in Parties is a Bauhaus cover with "industrial, chugging guitars and augmented strings", compared to the original version. Both Walking on Air and Love is Dead were later included in Love Is Dead. 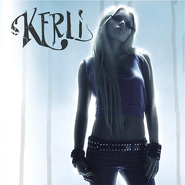 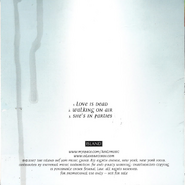 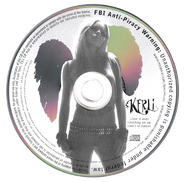 Add a photo to this gallery
Retrieved from "https://kerli.fandom.com/wiki/Kerli_(EP)?oldid=16032"
Community content is available under CC-BY-SA unless otherwise noted.