Kerli Wiki
Register
Don't have an account?
Sign In
Advertisement
in: Songs, Songs written by Kerli, Singles,
and 5 more

Ago Teppand
Blossom is a song performed by Kerli. The song came out as a single on April 28, 2016, without announcement: after posting three total black images on her social media, she published the music video on her YouTube channel. As March 1, 2018, the video was viewed more than 1 million times. It was the second single of the original version of Kerli's third studio album, scrapped along with the original album art and the original fantasy theme as happened with Feral Hearts, Diamond Hard and Spirit Animal, for the new darker album theme for the released album Shadow Works.

In the video, the first thing that can be seen is the following:

For thousands of years, the people of Estonia have lived in harmony with the diverse plant kingdom. Whether by healing or sustaining one another, not only have we survived - we've learned to blossom.

So the song is an ode to the plant kingdom and is not just a story of survival, but an audiovisual poem about thriving in the face of obstacles. It is inspired by the most powerful healing plants of ancient Estonia.

Writing and recording it was a cathartic experience as I had gotten lost at some point prior to it and had started believing my screams and howls were somehow unruly or shameful. Prior to my independent era I had gotten so afraid to show my true colors I wasn’t even using my full voice to sing. [...] This song brought me back to my roots and to telling stories I was proud to leave behind for my children. I also had an amazing opportunity to connect with my first singing teacher and record a choir of his current students. What a beautiful feeling of coming full circle!
No one is safe from a rough set of cards that life can deal us but how we deal with these cards is up to us. Winning against the odds and overcoming things that seem impossible to overcome is how our gold nugget of a soul gets not only recognized but polished, shiny and awe inspiring. Whatever it is that you might have dealt with, are dealing with or are yet to deal with - remember, not only do we survive, we blossom.[1]

The song came out, with the related music video on her YouTube channel, on April 28, 2016, without letting know in advance: she just published three total-black images on her social accounts and then the video appeared. On May 27, she released the Halls of Heaven Sessions version and on May 28 the second arrangement of the song was online to be streamed and bought.

The music video for Blossom is inspired by the most powerful healing plants in my precious homeland Estonia. It is not only a story of survival, but of beating the odds and thriving in the face of obstacles. At the time I was writing this song, I was in a stage of my life where I found myself overcome with a strong calling, to reconnect with my roots in order to gain strength. Creating the story from the perspective of a tiny seed growing underground, and ultimately bursting through the spring's frost to find the sun, felt like the most natural thing in the world. Estonia is one of the oldest documented nations in Europe and one of the most unique things about us is the way we make [?] technology with an ancient way of living in symbiosis with the plant kingdom. Because of this very unique dichotomy, I felt the best artistic approach to this music video would be to take the most powerful Estonian healing plants I could find, and present them in a futuristic and geometric way. I was kinda my approach to marry thousands of years of tradition with something contemporary, which when you visit Estonia is a thing you'll see played out in every aspect of our life. Most of us grow their own organic food and even city dwellers have freezers full of mushrooms and berries they've gathered in the wilderness over the summer. When you visit Estonia, you can almost expect to be greeted with the tea made of some type of healing herb, because plants are such a natural part of our life: we have a widespread community of extremely knowledgeable healers and herbalist who run their own ecologically [?], and they're always willing to greet both guests and potential apprentices with open arms. With all this in mind, I want to take a moment and thank all my dear plant friends for being both the source of healing and providing me with the inspiration to create this video: Nettle, thank you for protection, [?] aitäh kaitset; Filipendula, thank you for health, [?] aitäh [?]; Fireweed, thank you for peace, [?] aitäh rahu eest; Malva, thank you for an open communication, [?] aitäh avatud; Great mullein, thank you for the strength, [?] aitäh [?].

The video is inspired by the following plants:

For the visuals, we created a dome frame and my mom covered it in fabric so it can be used as a projection screen. The plants that you see projected are sacred healing plants of Estonia made into moving images and everything that happens in the video is projected and shot at the same time. There is no special effects happening. I have become a huge fan of creating sets and shooting everything practically so it’s been a really fun journey playing around with different objects, shapes and lighting to create a world.[1]

A frozen heartbeat under the snow
I've been waiting, ready to grow
Shivering and weathering storms
Dreaming of some other place warm

Wilted voices ghostly in wind
Whispering "this could be the end"
Why are they forgetting me not?
Can't they see I'm hurting enough?

The Halls of Heaven Session[] 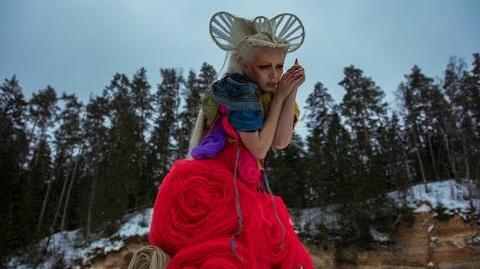 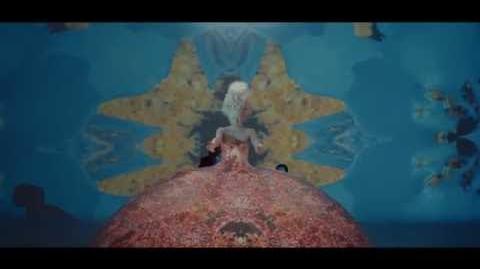 Kerli - Blossom (Behind the Scenes)